Blogging for the Baron: Slipped Discs and Salty Duds

Hi there, Spiders. I wish I didn't have a good excuse for missing this week's Thursday update, but I do. Somehow I managed to slip a disc in my lower spine while getting out of my friend's SUV. Normal, every day activity and my spine just decided that it wasn't up to it. So I spent Thursday night and Friday morning in increasing amounts of pain. Then I went to the doctor (thanks Obama!!) and found that instead of a pulled muscle, a particularly persistent cramp or anything else reasonable.. I had torn a disc in my spine and some of the jelly inside had leaked out and was messing everything up. That's not terrifying at all.


So now I have an absolute bucket full of drugs to take. Anti-inflammatories, muscle relaxants, steroids, two types of high-powered painkillers. It's pretty lame, actually. At least so far nothing actually knocks me right out... but then I haven't tried the Valium yet. Today, thankfully, was an improvement. If I'm sitting, standing, or walking... I'm mostly fine. It's just when I try to lean over, or move between positions that my back reminds me that it is most certainly not fine.

Despite all that mess, I did manage to get to my workshop today. Photogenic Drawing at the Light Factory! I had six students, which was a great number. We covered chlorophyll printing, cyanotypes and lumen prints in detail. We briefly went over the theory of anthotypes, but didn't have time to make an exposure since they take several days. I had planned to include salt prints, and I sorta did... but the paper I used wasn't the right kind of cheap watercolor paper. The silver nitrate solution soaked right into the paper, leaving a blotchy, streaky mess. None of the prints came out, not even a little. It really sucked. But the other three-and-a-half processes were a big hit!

There was another, smaller issue with the cyanotypes. I've been using very old and brown ferric ammonium citrate for months now. I got a large jug of it when the Light Factory moved from their old location to their new one, and I never turn down free photo chemistry! Since getting it, I've mostly been using it for parchment prints, where color and detail get a bit muddled anyway. Originally, though, I did some tests to be sure the brown ferric ammonium citrate would work. It seemed to work fine on those tests, some months ago. I can't find them now, but I distinctly recall doing them....

Anyway, today when we printed with the brown ferric ammonium citrate, all our cyanotypes came out with a strong sepia tinge to the highlights and with duller, more greyish-green blues. They basically look warm-tone or very "antiqued." Almost what you might expect from a tea toning. It's quite odd, but not unattractive. They still had full detail, highlights and shadows.

At least I know about it now, and I can take advantage of the difference. The warm-tone cyanotypes are quite pretty, so I'll be trying those out with some negatives. I might even have to start making new negatives! It even worked out really nicely with just photograms. The yarrow photograms pictured above came out great on the warm chemistry. I really love the look of yarrow sprigs, too. I'm going to have to see if I can get ahold of some myself. The yarrow my student had started wilting pretty fast in the heat, and by the time I got it home, it had curled up on itself. Big bummer. I'm going to try putting it in water and coaxing it back to life! 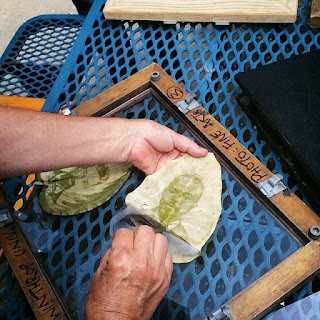 My students today had great success using digital transparency positives for chlorophyll printing. One of them brought in some historical photographs of faces and some scanned nature etchings from old books. They printed really well! I'm going to have to consider what kind of images I might work with, since I haven't been shooting a lot of actual photographs over the past several years. Still, it's pretty cool stuff.

Overall, today was very productive. I had a great time, and I'm feeling really inspired to start some new experiments. I hope my students from the workshop feel the same way!
Posted by Blue Badger Studios at 11:56 PM No comments: 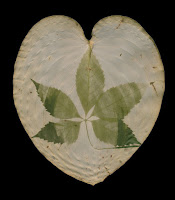 Hello Spiders! This week is another short update. I've said before the chlorophyll prints need heat as much as light, and I think today's results pretty much bear that out. It was 98F outside today, with only moderate sunlight. Despite the light situation, the three chlorophyll prints that I had exposing are showing more complete bleaching than almost any other. Certainly nothing else has exposed as fast, since these prints were only in place for about half a day (dawn-2PM). Normally I leave chlorophyll prints out for a full day or longer. These prints have also done something else: held detail. In the two prints pictured above, there is actual shading and fine detail visible. The vein structure of the leaves that were used as negatives is easy to see. It's very clear, especially in the smaller print of the mulberry leaf. That's quite surprising. I've never had such detail before and I didn't expect it, certainly not from such a short exposure. It's quite a nice surprise!

All three prints aren't necessarily all my favorite. There's very little contrast in the largest one, for example, but but the other two are great results. Eventually I may try negatives instead of just photograms, but the last time I did that, the sweated moisture from the leaf caused damage to the negative. Further, given the lack of detail in the process, it would have to be a very clear, high-contrast negative. I don't have a lot of images like that. Faces appear to work pretty well, from what I've seen in work from other artists. There are some great chlorophyll printers out there, even just in a quick Google Image Search. 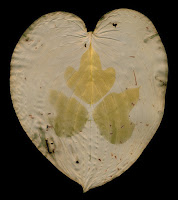 With temperatures projected to continue on in the high 90s for the rest of the month (global warming sucks), this should be a great time to make more chlorophyll prints. Isn't it wonderful that my alternative process workshop falls during that insane heat? As long as it doesn't actually rain during my workshop, everything should be great!

Posted by Blue Badger Studios at 11:54 PM No comments: 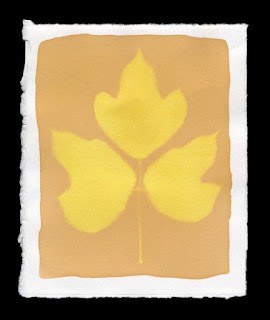 The first time I tried making an osage orange anthotype, I got very odd results. Instead of fading, the osage orange dye exposed to sunlight darkened. With all the sunlight that I've been having lately, I decided to give the osage orange dye another chance to show off its crazy properties. Once again, the exposed portion of the print has darkened dramatically.

This exposure was a bit longer (12 days vs 10) but it shows a much better result. The first experiment was during the winter months, this is during the summer, which accounts for the difference. Sunny weather really is vital for anthotypes. I think osage orange is probably a minimum of one week, even with lots of sun. I checked the exposure and it didn't seem to be moving very quickly.

I'm planning a really extended exposure soon, about a month, just to see what happens. When I quit my job at the university, I had to give back all the stuff I'd borrowed from the lab... including a contact printing frame. So I'm short one of my nicest frames. The month-long exposure will probably be fairly small.
Posted by Blue Badger Studios at 5:04 AM No comments:

Hey there, Spiders. This has been a very busy week for me. I've been sick, flown to Boston, hunted down apartments, met my roommate, met some other Lesley graduate students, toured the campus, flown back and still been sick. So, unfortunately, I haven't had a lot of time to do any experiments.

Instead, I'm going to tell you about the benefits of doing cyanotype on silk. I've discussed the problems with it before, but there are some distinct pro's.

The lightweight silk habotai that I buy my scarves and bags in is sturdy, but also very permeable. That means the material stains really well with minimal application of chemistry. It isn't too absorbent, so it washes clean very quickly. A two or three minute rinse is all you need to clean all the residue from silk, unlike canvas which needs a hugely extended soak of hours to diffuse all the chemistry out. For me, that's a big bonus. I like being able to work on lots of things in a day, and the canvas really slows me down since I can only soak so many objects at once.

Because the silk is so thin, chemistry will soak right through something like a bag or garment with two layers. This is great, if you want to coat both sides at once. Not so great if you are trying to leave one side blank. If that is your goal, you must put a blocking layer between the two pieces of silk. Your second side is going to be a bit lighter if you expose it indirectly (by just letting the object/negative on the top shadow both sides at once). If you want two different, fully developed images, again, put in an opaque blocking layer. Then you can just flip the silk when you're ready to do Side B.

Silk habotai also dries very quickly. It can, in fact, dry in minutes if wrung well and blow-dried. Or you can hang it in the sun, or in front of a fan. Since cyanotype is permanent, it can be treated as normal silk. Follow all standard drying, ironing and steaming instructions. Washing is a bit different, since you will bleach cyanotype if you use standard alkaline detergents. So wash only with very mild soap, if you must use any soap at all.

I quite enjoy printing on silk. I plan to order some more tiny scarves and maybe look at trying larger things again. Especially once I get to grad school.
Posted by Blue Badger Studios at 1:05 AM No comments: